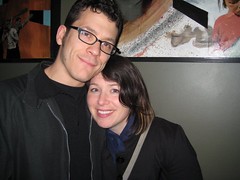 I had to substitute a few S songs by the same artists for lack of availability on the site I was using, but in case anyone has a hankering to hear my ten S songs from back in the day, they're below.

If this works, it should enable you to listen to things I've been listening to online lately. If it don't work, you're looking at some garbled html and your browser's probably crashing. Enjoy, and/or sorry.

The estimable malconstant has once again pointed me in the direction of that most noblest of internet fartaround inducers, the meme. He listed the ten favorite songs he could think of starting with a particular letter of the alphabet. I commented, and he gave me my very own random letter, an S. So here, with little ado, are ten of my favorite songs that start with S.

Star Power Sonic Youth
Substitute The Sex Pistols (covering The Who)
Storm Vibrations Guided by Voices
Satellite Robyn Hitchcock
She Don't Use Jelly The Flaming Lips
Still Ill The Smiths
She Cracked The Modern Lovers
Soeng Isaan Caravan (OK, I cheated a little on this one--it actually begins with a ซ)
Snowfall The Halo Benders
Son of a Gun The Vaselines

Phnom Penh can be a pretty overwhelming place, even by Southeast Asian standards. I’m no slouch; I studied Southeast Asian history in school, can speak a little Khmer, and had been to the border a couple of times. I’d also traveled pretty widely in Laos, the poorer parts of Thailand (visit the countryside in the northeast for a few days and be reminded that it’s still a developing country), and Vietnam. So I was arrogant enough to think I’d have a pretty good sense of what to expect when I finally got there last year.

But of course, I was totally wrong. There were a number of things that reminded me of other Asian cities I’d visited, particularly in Thailand, which modeled many of its architectural and ceremonial traditions after ancient Cambodian precursors, and exerted a significant influence in the other direction in subsequent centuries. There are also obvious parallels to Laos, and to other parts of the Theravadin world. But there are also at least as many unique and sometimes deeply startling aspects as well.

The most immediately jarring features of this colorful, bustling, extremely friendly, and still more than a little unsteady little metropolis are without much doubt the urchins and the amputees. Little kids selling shoeshines, postcards, water, and other stuff throng the little clot of tourist-oriented hotels, bars, and restaurants along Sisowath Quay. Landmine victims beg for change at the temples and on the streetcorners.

I gave a lot, bought a lot of stuff I didn’t need, and got into a lot of conversations with the street kids, especially over the first few days, but with deep misgivings. I knew that the kids probably weren’t getting the money in the end. I recognized with particular discomfort that the surprisingly fluid English of one adolescent girl with an armload of bootleg guidebooks was riddled with lies. Of course she is needy, and I’m sure her true story, whatever it is, is compelling, but she was also obviously hustling me. It was hard not to feel creeped out, and worried for her future.

The next thing I found startling, maybe even more than the poverty, were the city’s striking parallel, or even multiple, economies. Not so much for the shockingly expensive luxury-tourism facilities that are proliferating—Cambodia’s worth going to, and where people want to go, expensive hotels get built. But the facilities set up for those who are there to stay were more amazing. There’s a very healthy international development community that has taken up residence in some of the best-refurbished colonial buildings the old quarters of town, and international development aid budgets, have to offer. They’re clearly setting up for the long haul, and doubtless living a lifestyle that, modest though it may be by international standards, is all but incomprehensible to their Cambodian neighbors.

Maybe even weirder, there’s also a growing community of Western aesthetes—antiquarians, artisans, clothing designers, restauranteurs, and others—who’ve made Phnom Penh their home base. Surprisingly expensive galleries and ateliers abound, offering everything from handicrafts to modern silk dresses. Coffeeshops and bakeries that would not be out of place in Palo Alto, California, (except for the fact that they’re served in French mansions from the 1930s), right down to the kiwi tartlets and $2.50 lattes, dot the urban landscape to service fellow expats.

In spite of all this, and in spite of the heaps of garbage and pervasive dust and all the other problems that the Khmer capital will continue to wrestle with well into the future, there is also a real sense of hope in many quarters. Dozens of restaurants and shops supporting worthy causes can be found around town. Alongside (and even among) bloated government expenditures some positive impact is being had by local and international NGOs. And independent of all the global concern their long term guests seem to express, local people are mostly very warm, open, and welcoming.

Finally, grungy and shambolic as it is, the city itself has a great deal of charm in its own right—historical architecture, lovely markets, temples, and riverside promenades are all worth experiencing if you like urban areas.

So go and visit. Try to see more than just the grim monuments to the tragedy of the 1970s, and try to spend conscientiously, but be prepared for at least a little sensory and cognitive overload.

Yeah, Lonely Planet uses the phrase “crumbling French artitecture” rather too loosely, but Battambang is nevertheless an atmospheric place to wander around for a day or two. There’s not much to do, but it’s very pretty in a run-down way. Plus, there are no urchins selling postcards yet, either, so it’s refreshing after the sad onslaught of Phnom Penh.

The boat trip from Battambang to Siem Reap along the Sangker River, however, is best approached with caution. There’s some beautiful riverside scenery, yes, and an interesting stop for lunch at a floating village, indeed, but it’s a very long, very loud trip.

We did it in just under ten hours (on heavily vibrating wooden bench seats). We also had the privilege of a boat accident (we smashed the prow of a smaller fishing boat with an appropriately distraught family on board—no injuries, thankfully) and a mysterious breakdown.

Do it, sure, but make sure you really want to spend a long day on a boat. The bus is faster and cheaper.

I went to the DF for the first time frankly expecting the worst…. smog, crime, traffic, thieves in taxis. I found instead a thriving, teeming, cheerful, colorful, and diverse ancient metropolis with the cheapest, and probably most efficient subway system I’ve ever used. I felt as safe as I do in New York (which is plenty safe), and was embarrassed for being so paranoid.

Some of my favorite moments included: fantastic museums, wonderful galleries, art, and shopping; Strolling the parks and old quarters admiring pyramid blocks repurposed into 17th century seminaries; Stumbling upon a goth-industrial club night (called The Bat Cave Club) on the top floor of a computer school in the charming, but quiet after dark, Centro Historico, featuring a fun but weird mix of really gothic music and slightly incongruous 80s pop. Mexican goth kids dancing to Siouxsie and the Banshees and slamming down $1 Indio beers. Being the only gringos on the dance floor at a norteno (Mexican country) bar in the Zona Rosa featuring the loudest banda you ever heard.

I can only say that I was rather underwhelmed by the much-vaunted nightlife district of Condesa… sort of stylish, sure, but rather yuppie for my taste. The Zona Rosa, too, was a little garish, and sort of tacky, but as a San Franciscan I was delighted to see such a prominent (by Latin American standards, at least) LGBT community acting out.

Check out the least popular part of the country! You’ll be glad you did!

I had the distinct privilege of living and working near the exact center of Northeastern Thailand for several years. Aside from a few justly revered historical sites (Thailand’s only vestiges of the empire of Angkor) the region lacks, for the most part, the kinds of attractions tourists come to see. There are no beaches, apart from the sandy banks of the mighty Mekhong, no real mountain ranges, and people speak better Lao than English. But where it lacks sophisticated tourism, the region more than makes up for it with what I believe are the best examples of the good things Thailand is famous for: food, textiles and handicrafts, and most of all, the genuine warmth and openness of the people. I firmly believe that the Northeast is the friendliest part of a famously friendly country, and most people have yet to get jaded by putting up with legions of smelly, dreadlocked backpackers, as well-intentioned as their garishness generally is.

For these reasons and more—I’d include the music and local festivals, as I’m a big molam fan—the region known as Isaan will remain my favorite part of Thailand, a country I love more than most places.

Since moving back to the States a decade ago, I’ve earned a Master’s degree in Thai literature (which is almost as useful as it sounds) and returned to visit many times. I’ve been fortunate enough to have the chance to see all of Thailand’s regions, and most of its provinces. I speak and read Thai well, and like to believe that I know the country fairly intimately.

But no matter how exciting Bangkok is, or how beautiful the misty green hills of the North may be on a winter morning, they are second to me to the wide expanse of the Mekhong, and the small towns and cities of the Khorat Plateau. I will forevermore order my green papaya salad Lao style, regardless of the funny looks I get in restaurants in Bangkok.